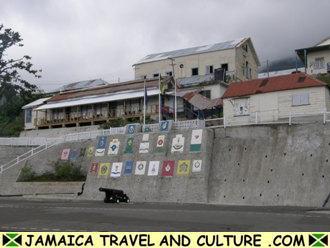 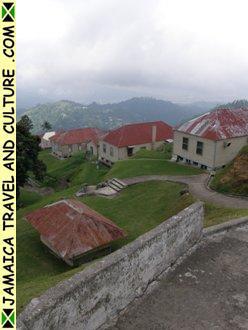 An interesting stop-off on the way to Holywell is the army barracks at Newcastle. The barracks used to belong to the British Army but are now used as the training ground for the Jamaica Defence Force (JDF).

The main road to Holywell takes you through Major General Sir William Gomm Square. This is the parade ground for the JDF troops stationed there, if you're lucky you may catch the troops carrying out a drill.

The regimental badges of all the regiments who have served at Newcastle are proudly displayed on the embankment wall of the parade.

The barracks at Newcastle were established in 1841 by Major General Sir William Maynard Gomm who was Lieutenant Governor of Jamaica at the time. British Troops stationed in Jamaica were experiencing very high rates of death from yellow fever. The problem had grown to such a degree that being stationed in the Caribbean was almost seen as being a certain death sentence. Sir Gomm noticed that rates of yellow fever infection were much lower among those who lived in the mountains than those who lived in the lowlands. He then embarked on a long campaign to get the British Government to allow him to establish barracks in the mountains. In 1841 he was granted approval, the Army bought a coffee estate in the Blue Mountains and began establishing a base.

The British occupied Newcastle until the outbreak of the Second World War. When Jamaica achieved independence in 1962 Newcastle Barracks were given to the JDF. The JDF use Newcastle as a training ground to this day.