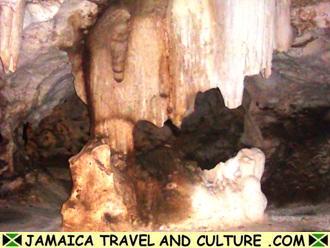 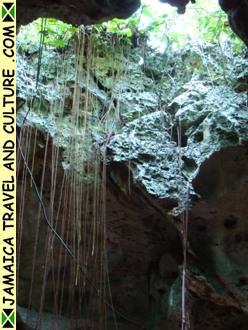 The "Green Grotto Caves" are filled with stalagmites, stalactites, light holes and ceiling pockets. There is also a natural wishing well and hollow rocks which act as natural drums. The caves sport many formations which resemble familiar objects, your guide will point these out to you on your tour.

The main feature of Green Grotto Caves is the "Grotto" with an underground lake which can be found at a depth of 36 meters below the surface. The lake is crystal clear and incredibly still, on first viewing the lake you may not even notice it it there as it provides a perfect reflection of the cave roof above. The lake is connected to the sea through a series of underground channels, as a result the lake rises and falls with the sea level.

There are sections of the Green Grotto Caves where very little exploratory work has taken place. These are known as the "Wild Caves" and are off-limits to tourists. 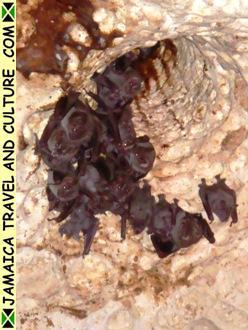 Watch out for the bats!

The modern day inhabitants of Green Grotto Caves are bats! Many bats have made their homes in the dark crevices found in the caves. Bat excretions (know as guano) are rich in nitrogen and make a good fertiliser. In the days of the buccaneers, the guano was collected from the caves and used as an ingredient in the manufacturing of gunpowder. Because of the explosive nature of the guano, it was dangerous to carry naked flames in to the caves so early explorations were made in the dark.

Guano build-up can still be found in the caves - this is one of the reasons that visitors are issued with protective headwear (the guides also advise visitors to close their mouths when looking up at the bats)!

History of the caves

Your guide will explain the rich history of the caves, telling the story of the people who have used the caves for various purposes over the years. The discovery of cave paintings, tools and fragments of pottery indicate that the original inhabitants of the caves were the Taino Indians who would have used the caves for shelter. The next know inhabitants were the Spanish who, at the time of the British invasion of Jamaica (in 1655), hid in the caves to avoid capture. There is an underground tunnel which links the caves to the sand at Runaway bay. It is believed that the Spanish used the tunnel in their attempt escape the Island and flee to Cuba. Runaway slaves have also used the caves to hide from their former masters. During World War 2, Rum barrels were stored here for safe keeping by the Jamaican Government.

In recent years the main chamber of Green Grotto Cave was used as a disco! Parties were frequently held here. However, the cave is no longer used for these purposes as it was feared that the heavy vibrations of the sound systems were causing damage to the structure of the cave.

In 1999 the caves were purchased by the Urban Development Corporation, UDC (a Governmental organisation) to develop as an eco-tourism attraction. The UDC have invested heavily in the site to make it a world class tourist attraction. 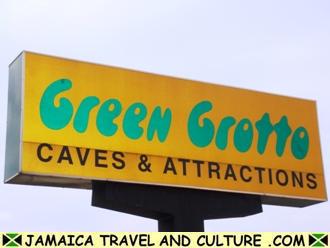 The rules of the caves

The following rules must be observed within the cave Naturally, it is advisable to take a camera to preserve some of the memories of your trip and share them with others!

The Green Grotto Caves feature in the James Bond Film - Live and Let Die. The caves were the setting for Doctor Kananga's subterranean base on the island of San Monique. The scene where Bond's submarine emerges from the underground lake was filmed in Green Grotto Cave.