Home > The Arts > The Pirate's Daughter

Review of The Pirate's Daughter 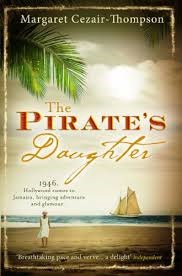 The Pirate's Daughter is a novel based on a fictionalised account of Errol Flynn's years in Jamaica. Errol Flynn arrived in Jamaica in 1946 when his yacht, the Zacca, was damaged by a storm, forcing him to land in Port Antonio. Flynn fell in love with Jamaica, purchasing Navy Island for a home and spent a large proportion of his later years living there. There are many tales and rumours of how Flynn spent his time in Jamaica, although it is generally agreed that he enjoyed many wild parties and played host to many Hollywood celebrities of the era.

The Pirate's Daughter tells a fictional tale of the lives of two women whose lives were affected by Flynn's time on the island, Ida Joseph (an infatuated teenager) and May, Ida and Flynn's daughter. The story begins with the arrival of Flynn to Jamaica; Ida's father, Eli, is a local taxi driver who shows Flynn around Port Antonio. The two strike up a close friendship and Erroll soon gets to know the Joseph family. Ida is an impressionable teenager who is quickly infatuated with the movie star. As the years pass (and Ida gets a little older), Ida's feelings towards Flynn are reciprocated and the two begin a relationship. However, the relationship comes to an abrupt end when Ida becomes pregnant with Flynn's baby.

Ida was effectively cut off from Flynn so, after the birth of her daughter May, she emigrated to New York in search of a better life, leaving May in the care of a trusted friend. Whilst Ida struggled to get by in America she sent what money she could for May's upkeep but this did not amount to much and her daughter grew up on the poverty line. After some time in New York, Ida meets up with an old friend of Flynn's living nearby, the two start a relationship and they return to Jamaica together. On Ida's return to Jamaica she re-established a relationship with May, who grows up to join Jamaica's elite, a society she is only reluctantly accepted into.

The Pirate's Daughter is set during the turbulent years before and after independence after Jamaica gained independence. As well as the story of Ida and May's life, the Pirate's Daughter also addresses the violent times the country was facing and how this impacts on the lives of a family of humble origin who had acquired status and wealth. The politics of race and class in Jamaica are also themes of the novel.