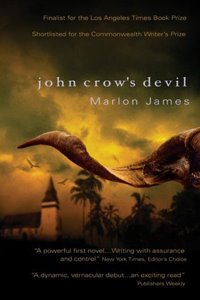 John Crow's Devil is the first novel by Jamaican author Marlon James. The book tells the story of a battle of good against evil and is told against the sinister backdrop of a corrupt isolated village of Gibbeah, set deep in the Jamaican countryside and virtually cut off from the rest of Jamaica. The book features incidents of murder, paedophilia, bestiality and matricide.

The people of Gibbeah are humble god-fearing folk who are shepherded by an alcoholic preacher (Hector Bligh, the "Rum Preacher") who holds a very light rein on his congregation. Many years ago Bligh had driven his brother to suicide, he now lives his life wracked with guilt and is desperate to absolve his sins, however, he struggles with the challenge (and implicit hypocrisy) of guiding his parishioners to lead a virtuous life.

One day, in 1957, seemingly out of the blue, a swarm of John Crows (vultures) herald the arrival of the self-proclaimed "Apostle" York to the village. York immediately throws Pastor Blight out of his own church and begins preaching to Gibbeah with a merciless "fire and brimstone" style of preaching. The Apostle seems to be endowed with biblical powers and the congregation who, quite literally, have the fear of god put in to them immediately follow word of the Apostle's dramatic proclamations. Swept up by religious fervour, the people of Gibbeah follow the Apostle's orders to eradicate sin where it is deemed to exist and meter out severe punishment to the apparent sinners. The emaciated Pastor Bligh attempts to battle against Apostle York, leading to scenes of epic confrontations, making Gibbeah the epicentre of the battle between good and evil. Unlike the villagers (who are sure that Apostle York has been sent straight from god), it is not clear to the reader of John Crow's Devil to what extent either of these flawed preachers represent good or evil.

Each preacher is supported by a complicated female character, Bligh by a jaded widow who is cynical about religion in general and Apostle York in particular. Apostle York is supported by Lucinda, a former practitioner of Obeah (Caribbean spiritual magic) who attempts to fight against the dark side of her nature through puritanical living.