How Stella Got Her Groove Back

Home > The Arts > How Stella Got Her Groove Back

Review of How Stella Got Her Groove Back 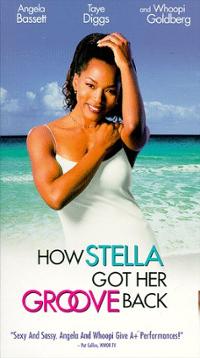 How Stella Got Her Groove Back is an unconventional love story set in Jamaica, San Francisco and New York. Angela Bassett plays Stella, a successful 40 year old divorcee with a glittering career as a stockbroker. Stella lives in a dream house in the affluent Marin County suburb of San Francisco with her 11 year old son, Quincy (played by Michael J Pagan). Stella's life is turned upside down when her larger-than-life extrovert friend Delilah (played by Whoopi Goldberg) convinces her to take a vacation in Jamaica. Whilst on vacation, Stella is courted by Winston, a 20 year old Jamaican medical student, played by Taye Diggs. Although initially put off by the age difference, Stella eventually succumbs to his charm and the two have a whirlwind holiday romance. Winston surprises Stella by telephoning her after she returns to San Francisco and the two begin a long distance relationship, much to the disapproval of Stella and Winston's families. Stella is then faced with a difficult decision of following her heart (or, at least, animal instincts) by persevering with the relationship or to listen to the advice of her friends and put an end to it.

How Stella got her Groove Back is unlikely to appear on your list of all-time favourite films but does provide entertainment for a girls' night in and some beautiful scenery shots of Jamaica. Locations used for the film include the Round Hill Hotel and Villas in Montego Bay and Time-n-Place in Falmouth.

How Stella Got Her Groove Back is based on Terry McMillan's semi-autobiographical novel of the same name. The novel was adapted in to a screenplay by Terry McMillan and Ron Bass, who had previously worked together on the big screen adaptation of McMillan's previous novel "Waiting to Exhale". How Stella Got Her Groove Back was directed by Kevin Rodney Sullivan. The movie was Sullivan's directorial debut, having previously specialised in television.