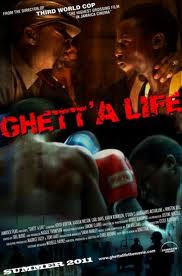 Ghett'a Life paints a gritty, realistic, picture of life in one of downtown Kingston's violence-torn ghettos.

The film follows the story of Derrick, a keen boxer. Derrick father is an active political campaigner and preaches the benefits of supporting his party to his constituency. His message is given influence through Sin, the Don of the local gang who uses violence and intimidation to get terrified residents to conform to his way of thinking, including his political allegiances. Unfortunately for Derrick, the local boxing gym falls on the other side of a dividing line between the area controlled by Sin and the area controlled by the rival gangster, "Ratchet", who has an allegiance to the rival political party.

One day Derrick crosses the forbidden line and attempts to join the boxing gym. It was immediately made clear that his presence was not welcome and that he should stay on his own side of the dividing line. However, an open-minded coach dictated that Derrick should be given a chance and, through showing dedication and raw talent, Derrick wins over his detractors.

Life is not so easy on the other side of the community when the gangster Sin and Derrick's politician father are incensed by Derrick's treacherous act of crossing over the fence and fighting for the other half of the garrison community. The story then unfolds with Derrick having to weigh up right and wrong and how to follow his dream in the difficult, violent, environment of a Kingston Ghetto.

Ghett'a Life is a wholly Jamaican project, the writer and director (Chris Brown), cast and crew are all Jamaican. Ghett'a Life was first released on the world of film when the script was aired at the 2006 Cannes film festival and won the Hartley Merrill International Screenplay Award. The film was shot in the JDF base which had been artfully decorated as a Kingston ghetto for the set of the film and released in 2011.