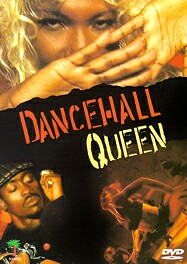 Dancehall Queen is set in one of the poorer communities of Downtown Kingston. The hero of the story, Marcia, is a roadside vendor, forced to do whatever she can to raise, feed, house and educate her two children. However, in the ghetto, nobody gives money away for nothing.

The viewer soon gets an insight in to the lives of ghetto folk, where crime, violence and sleaze are never far away.

Marcia sees how "plain" girls seem to be making a good living as dance hall divas and sees becoming a "dancehall queen" to be her ticket out of the ghetto. She practices her moves in front of the mirror, scrapes together enough money to buy some outlandish wigs and revealing clothes then hits the dancehall

At times a bit corny and predictable, Dancehall Queen is none-the-less an enjoyable film. If for no other reason, the film is worth watching for the sights of Kingston, guest appearances by Beenie Man and Lady Saw and the (fairly) easy to understand Patois spoken by the cast.