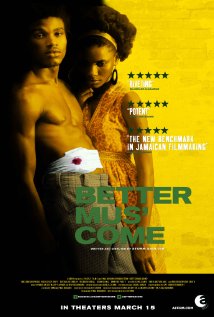 Better Mus' Come is a film about life in one of downtown Kingston's garrison communities in the late 1970s.

Rikki, (played by No Maddz singer Sheldon Shepherd) the "hero" of the story, is the leader of a section of the community which is aligned to the opposition Jamaica Labour Party (JLP). He leads a gang of enforcers who, amongst other tasks, run violent errands for the local JLP representative. This arrangement often lead to bloody skirmishes with their opposite number in the neighbouring People's National Party (PNP) controlled community. Despite being the leader of the gang, Rikki has a more positive approach to the conflict and urges caution and restraint when dealing with enemies. His gang mates are less understanding and raise questions about Rikki's leadership.

One night, at a dance, Rikki meets Kamala (played by pulse model Nicole Sky Grey), a beautiful girl who comes from the Jamaican countryside but has come to live in the neighbouring PNP controlled community (Rikki's enemy territory). A romance between the two develops although this is greatly complicated by the political violence between their communities.

As the film develops, poverty drives discontent among Rikki's gang and violent acts are committed to help put food on the table. Their acts are met by equally violent tit-for-tat attacks with many innocent people being killed in the process. The film climaxes with a harrowing scene which is essentially a fictionalised account of the 1978 Green Bay massacre.

Better Mus' Come was written and directed by Jamaican director Storm Saulter (who had previously specialised in music videos) and produced by Paul Bucknor (co-producer of The Full Monty). The film's release in 2010 saw a 6 week sell-out run at the Carib cinema and won several prestigious film awards.