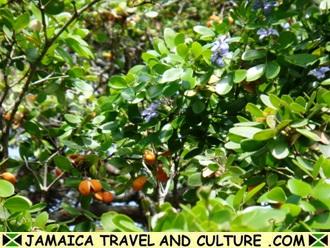 The flower of the Lignum Vitae Tree is the national flower of Jamaica. The tree is indigenous to Jamaica and has been an important export crop to Europe since the beginning of the 16th century. The Latin name "Guiacum officinale" translates in English to the "Tree of Life". The wood from the tree is also known as palo santo, greenheart, holy wood and is one of several woods know as ironwood (due to its strength). 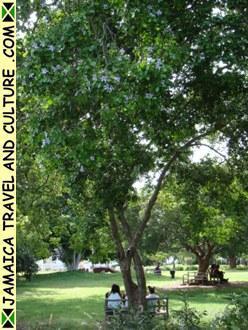 The Lignum Vitae tree is slow growing and generally grows to about 25 feet. Its main distinctive feature is the blue / purple flowers at the tips which bloom twice a year. The tree also bears a red-orange fruit which is about 1 inch in diameter, the fruit ripens in September exposing black seeds and a red fleshy pulp. The wood has a yellow / greenish hue which darkens quickly after the chopped wood has been exposed to the sun.

Wood from the Lignum Vitae tree is extremely versatile and has served many uses over time. The resin of the tree is guaiacum gum which has been used as a treatment for arthritis, gout and syphilis. It is rumoured that Christopher Columbus used Lignum Vitae from the new world to cure a case of syphilis (which he also contracted in the new world)! The resin is still used today in expectorants.

The wood from the Lignum Vitae has two important qualities which has made it a popular wood with carpenters, hardness (it tops the Janka scale of hardness with a rating of 4,500) and natural lubrication (the resin content is about 30% by weight). The fibers of the wood are arranged in a diagonal, oblique fashion making it resistant to splitting and chipping. These qualities make the wood ideal for the following uses: However, as the wood is so dense (around 1.3 grams per cubic centimeter) that it does not float in water. 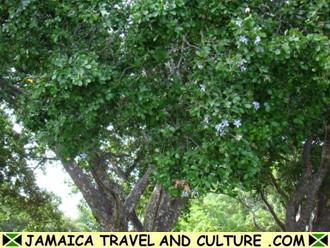 The tree grows best along the costal areas of Jamaica, it also grows throughout the Caribbean, Mexico, the north coast of South America as well as Florida and California in the United States. Lignum Vitae is the national tree of the Bahamas. Some species of hardwood found in Australia (such as acacia and eucalyptus) are sometimes incorrectly called Lignum Vitae. Bulnesia Saemientoi is known as Argentine Lignum Vitae but it is not genetically related to Lignum Vitae.

The number of lignum vitae trees has reduced rapidly in recent years thanks to excessive harvesting. The tree has now become a protected species and is listed as a potentially endangered species in appendix II of the Convention on International Trade in Endangered Species of Wild Fauna and Flora.