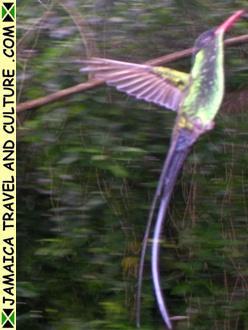 The Doctor Bird (Trochilus polytmus) is the common name for the Swallow-Tail Hummingbird, the national bird of Jamaica. The feathers have a shimmering emerald green and black colour, a trait which is peculiar to this family of birds. The bird is able to fly backwards, this causes the feathers to make a humming sound when it flies (giving this avian family its common name of the hummingbird). 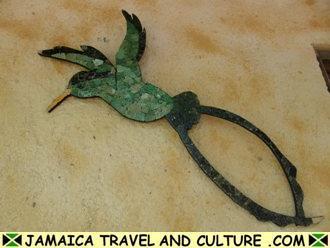 The mature male has two distinctive long tails which stream behind him when he flies. The pair of wings next to the tail feathers extend aboud 15cm from its back, these are usually crossed. The female does not have long feathers forming a tail but has shorter tail feathers with a white tip.

There are several theories about how the Doctor Bird got its name. One is that the black crest and long tail feathers of the male bird resemble the top hat and tail coats worn by doctors in days gone by. Another theory is that the name comes from its long bill which it uses to extract pollen from plants (as it resembles a doctor's syringe). The Taino Indians believed that the Doctor Bird has magical powers and called it the "God Bird", believing it to be the reincarnation of a dead soul. In most rural parts of Jamaica there is a belief that killing a Doctor Bird will bring bad fortune to one's self. However, killing a Doctor Bird is not easy, there is even a Jamaica saying "Doctor Bud a cunny bud, hard bud fi dead" (the Doctor Bird is a clever bird which cannot be easily killed).

The Doctor Bird is indigenous to Jamaica and is one of the most outstanding of the 320 species of humming birds. They are found mostly in closed forest wherever there is flowering plants. However, it can also be seen in gardens and parks. The bird's main source of nutrition is nectar from plants but it also eats spiders and insects. Doctor Birds tend to feed frequently during the day time and hibernate at night to conserve energy.