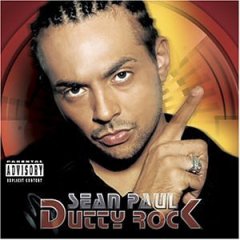 Many tracks on Dutty Rock were big hits all over the world. Indeed, 2002 and 2003 were years when Sean Paul could do no wrong with big singles from this album (Gimme the Light, Get Busy, Like Glue and I’m Still in Love With You) leading the way to many high profile duets with the likes of Beyonce Knowles and Blu Cantrel.

Following the chart success in these years, Sean Paul became a big player in the field of Dancehall, Reggae and Hip Hop.

Dutty Rock uses a wide variety of riddim tracks. From the Diwali riddim used on Get Busy to the high-tempo Indian beats featured on Shout to the "Uptown Top Ranking" riddim which underlies both "International Affair" and "I’m Still in Love With You" (the latter of these tracks being a cover version of the classic song by Alton Ellis).

Like Stage One, the songs on the original release of Dutty Rock also interspersed with several comedic "skits".

Following Sean Paul's success in the singles market, Dutty Rock was re-released in 2003 with a revised tracklisting, aimed at the international market. The Skits were removed, along with "It's On". "Baby Boy" - Sean Paul's duet with Beyonce Knowles was added.