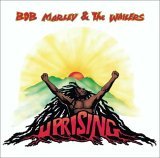 Uprising was the last album released by Bob Marley during his lifetime. All of the tracks from Confrontation were also recorded during the Uprising sessions but this was not released until two years after his death. Marley was very ill with cancer at the time that this album was recorded, however, the music shows no sign of weakness. Marley's influence in Jamaica was also as strong as ever (both of the main political parties had chosen tracks from "Uprising" as their campaign anthems for the 1980 elections - "Bad Card" for the ruling PNP and "Coming in from the Cold" for the opposition JLP).

Despite the title of the album, the spirit of Uprising is one of hope and a need for unity rather than aggression and rebellion.

The album ends with "Redemption Song" featuring just Marley's vocals and acoustic guitar. This song provides a haunting end to the last album Bob Marley released during his life time.