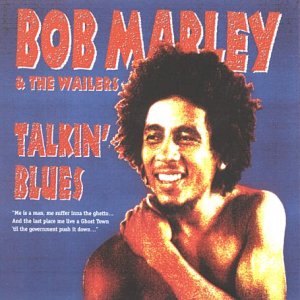 Talkin' Blues is a collection of live tracks, radio session recordings and clips from radio interviews.

Most of the tracks on this album were recorded during a 1973 session for KSAN radio in San Francisco, shortly before the original Wailers lineup of Bob Marley, Peter Tosh and Bunny Wailer decided to go their separate ways. However, Bunny Wailer had already made the decision to quit touring with the band by the time these recordings were made and Joe Higgs had his place on international tours. Peter Tosh and the Barrett Brothers were present for these recordings.

The interview clips are taken from a 1975 on-air interview with Dermot Hussey at Jamaica's JBC radio.

The tracks on Talkin' Blues have a much more intimate sound than other Bob Marley live recordings as they were played in front of a very small audience (5 or 6 people). The versions of these tracks which appeared on the studio albums released at the time were actually overdubbed prior to release to make them more accessible to mainstream rock and pop audiences. The versions heard on these recordings are much closer to the way the Wailers intended them to sound.