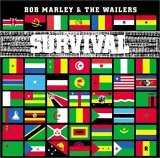 Survival is Bob Marley's most political album. The central themes of the album are the unification of African people and the evils of colonialism and neo-colonialism. In "Ambush in the Night" Marley sings about the assassination attempt made on him. True to Marley's ability as a songwriter, even though the songs on this album have a very specific subject matter, anybody (regardless of their age, sex or race) can find something in the lyrics to identify with.

The album features a now familiar line up of Bob Marley, The I3's as backing vocalists, Aston "Family Man" Barrett on bass, Carlton "Carly" Barrett on Drums, Junior Marvin and Al Anderson on guitar, Earl "Wya" Lindo and Tyrone Downie on Keyboards, Alvin Patterson on percussion. A wider variety of percussion instruments are used in Survival and percussion plays a more prominent role in the sound.

Like Rastaman Vibration none of the tracks on Survival feature on the Legend compilation. This is indicative of the fact that the tracks on this album do not fit in to the stereotyped idea of Bob Marley's music and offer the listener a chance to hear a different side of Bob Marley.

The digitally remastered edition of this album features the 12" mix of "Ride Natty Ride" as a bonus track.