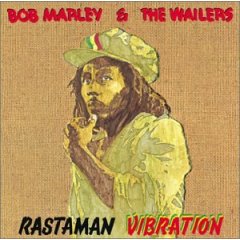 Rastaman Vibration features some of Bob Marley's most profound lyrical works and takes the listener on a real emotional rollercoaster ride. From the sadness of "Johnny Was" (a song about a mother grieving over her son's death), the rousing spirit of "War" which quotes from a 1968 speech by His Imperial Majesty Haile Selassie of Ethiopia, the biting social commentary of "Rat Race" and the uplifting "Positive Vibration" this is a lyrically powerful album.

Like all Bob Marley albums, Rastaman Vibration features several re-recordings of early Wailers tracks. Bob Marley fans may spot that the lyrics from "Roots, Rock, Reggae" are lifted from "Rainbow Country" although they sound entirely different in this song.

This is Bob Marley's second album without the original wailers. The line up still includes Carlton "Carly" Barrett on drums and Ashton "family man" Barrett on bass and the I3's (Rita Marley, Judy Mowatt and Marcia Griffiths) return on backing vocals. The band are joined by two new guitarists, Earl "Chinna" Smith and Donald Kinsey (who had also worked with Peter Tosh). 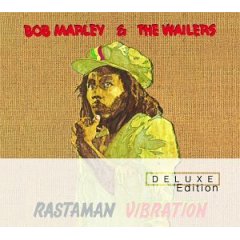 In 2002 a deluxe edition of Rastaman Vibration was released, featuring a whole host of bonus tracks.

Disc one includes "Jah Live" and "Concrete" as well as a several alternative versions of Rastaman Vibration tracks.

The second disc features 11 tracks recorded live at the Roxy in Los Angeles in 1976. Although all Bob Marley albums are excellent these recordings highlight the inadequacies of studio recordings in capturing the real spirit of Marley's music. Also on the second disc are two versions of "Smile Jamaica" which was recorded as part of the Rastaman Vibration sessions.

N.B. - The entire Roxy concert is also available separately as a two CD set, Live at the Roxy.