Home > Music > Bob Marley and the Wailers > Live at the Roxy 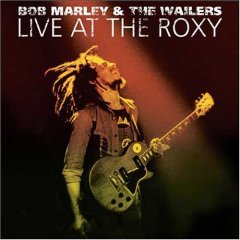 This double cd is a recording of an entire Bob Marley concert from his Rastaman Vibration tour. This concert took place at The Roxy in Hollywood, California on 26 May 1976. The concert was originally broadcast live on a Los Angeles radio station. The first cd was originally released as the bonus disc of the Rastaman Vibration Deluxe Edition. The magnificent encore of this concert is included on the second disc of Live at the Roxy.

The Roxy is a much smaller venue than those where Marley's previous live albums Live! and Babylon By Bus were recorded. The recordings made for Live at the Roxy have a more intimate sound as a result. Bob Marley sings some of his more politically orientated songs at this concert, in a much slower more laid back style than in other recordings.