Home > Music > Bob Marley and the Wailers > Live at the Lyceum 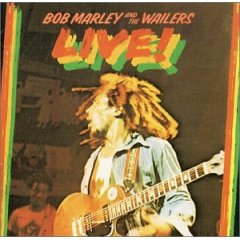 This album is made up of tracks recorded in July 1975 at the Lyceum in London as part of a tour promoting the Natty Dread album. Live! showcases the raw energy of Bob Marley making music in a way which his studio recordings sometimes fail to capture. Bob Marley took a rock-band-esque approach to his live performances, spicing up the set with long solos, jam sessions and improvised vocals. These can be clearly heard on Live!

The most famous track from "Live!" Is "No Woman No Cry". It is this version that was chosen for the Legend compilation and has left the (very different sounding) studio version to fade in to obscurity.

Kinky Reggae was included as a bonus track on the digitally remastered version of this album. This track was originally the b-side to the single release of live recording of "No Woman No Cry".