Bob Marley and the Wailers - Confrontation (1983) 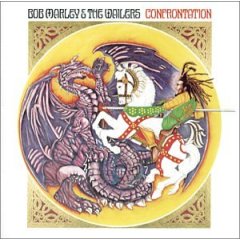 Several of the tracks on Confrontation were written at the same time as the tracks for Survival and all were recorded during the Uprising sessions. However, the album was not released until 1983, two years after Marley's death.

Many people believe that Marley intended to use these tracks to make an album which completed a trilogy of albums themed around African Unity (Survival and Uprising being the other two albums). Others believe that the album was put together after Marley's death using out-takes from his last two releases. The truth most probably lies somewhere between these two theories.

The tracks on this album have more of a raw sound to them, reminiscent of the early Wailers releases. As Bob Marley died before this album was completed we will never know if this was the intended sound.

The digitally remastered version of "Confrontation" also includes the 12" version of "Buffalo Soldier".