Home > Music > Bob Marley and the Wailers > Catch a Fire 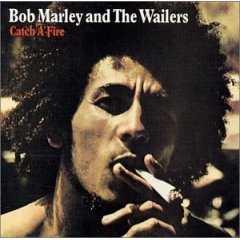 This is the first of two "official" albums recorded by the "Wailers" line-up of Bob Marley, Peter Tosh and Bunny Wailer. The band had recorded many singles before the release of this album, some of which were re-recorded for this album (the versions heard on Catch a Fire sound significantly different to the original single versions).

The album has more of a raw and edgy sound than some of Marley's later releases and many Bob Marley purists believe that this is his best album. Many of the songs on Catch a Fire deal with issues of politics and social commentary, in particular "400 Years", "Slave Driver", "Stop The Train" and "Concrete Jungle" where the band sing about current and historic struggles faced by the Jamaican underclass. Marley takes lead vocals on most of the tracks with Peter Tosh taking over for "400 years" and "Stop That Train" (which he is also credited with writing).

These songs are complimented by more laid back, playful tracks such as "Stir It Up" and "Baby We've Got a Date".

Two tracks "All Day and All Night" and "High Tide, Low Tide" were removed from the original release of the album but were subsequently added for the digital re-issue.

In 2001 a "Deluxe Edition" of "Catch a Fire" was released. This included a second disc containing the original versions of all tracks and a re-creation of the Zippo lighter packaging originally used for original vinyl version of the album (the album cover opened up like a Zippo lighter to reveal a cut-out flame). 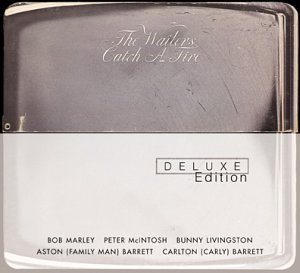 After Catch a Fire was recorded in Jamaica, the original tapes were sent to London and overdubbed with guest musicians commissioned by Chris Blackwell in order to make the album more accessible to the European and North American rock market.