Home > Music > Bob Marley and the Wailers > Babylon by Bus 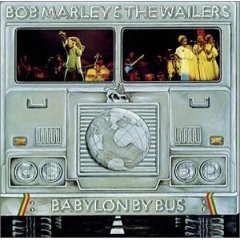 The tracks on Babylon By Bus were recorded live during Bob Marley's 1977-78 European tour to promote his Exodus album. Marley played many large venues during this tour as he was at the peak of his popularity. The large "stadium sound" comes across in Babylon By Bus as does the excitement of the crowd who were lucky enough to be at one of the most in-demand tours of the year.

Several of the tracks on this record are live versions of songs from Exodus, generally played faster than the studio-recorded versions.