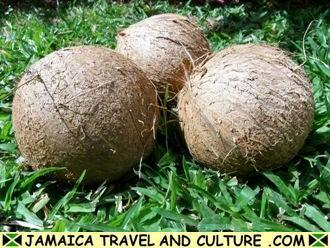 Coconuts are not native to Jamaica but were introduced by Spanish settlers in the 16th century. Coconuts have since become a well established part of Jamaican life, with coconuts being used in many traditional recipes such as rice and peas, run down and gizzada. 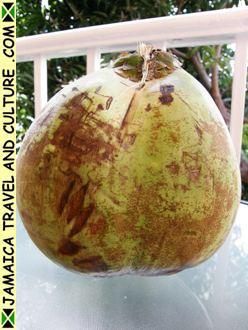 Coconuts are either harvested at their jelly stage or their mature stage. The jelly stage occurs between seven and nine months. During this stage the coconut yields sweet refreshing coconut water and a thin layer of soft, jelly like flesh. The coconut is fully mature after 10 to 12 months, when the flesh becomes thicker and more solid.

The main breed of coconut tree in Jamaica used to be the "Jamaican Tall" until the island was hit by a crippling outbreak of the yellowing disease in 1966, killing off most of the trees. These were replaced with the Malayan Dwarf and the Maypan Hybrid (a hybrid tree which was developed by the Coconut Industry Board) which have since flourished. Today there are around 80,000 coconut farmers in Jamaica, growing coconuts on 15,000 hectares of land.

The coconut tree is called the "Tree of Life" by some Jamaicans sue to the many uses it can be put to. It is widely know that coconut water makes a refreshing drink and coconut meat (or jelly) can make a calorie rich meal but the benefits of coconuts do not stop there. The inside of the trunk can also be eaten (similar to a heart of palm), the fronds make an excellent roofing material or can be woven in to bags. Even the shells can be used to make items such as jewellery and utensils or a fine charcoal for burning.