The Kool Runnings Water Park is located in Negril on Norman Manley Boulevard. It was established in early 2007 and consist of state-of-the-art facilities with activities for visitors of all ages, locals and tourists alike.

The water park features seven slides, all of which have different names from famous Jamaican phrases and places in Jamaica. There is a lazy river, a kiddy island and Anancy Village where go-karting and bungee trampoline activities are available. There are also several restaurants and a souvenir shop.

The quarter mile of lazy river is called Rio Bueno. The route takes you around the park and offers views of the Jamaican landscape over the great morass. 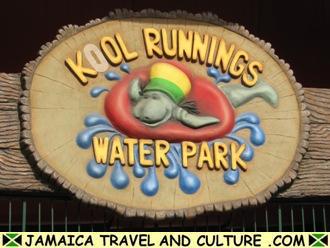 The most popular slide is the Green Grotto waterslide. It is named after the famous "Green Grotto" cave and underwater lake in Discovery Bay, Jamaica. This ride can be experienced on either a single or double tube.

A "kickpuppalick" is a Jamaican phrase meaning "somersault". The ride starts with a flume which plunges from a height of 40 ft. and ends in 28 ft. diameter "Splash Bowl" which you'll spin around and around in before landing in the pool below. 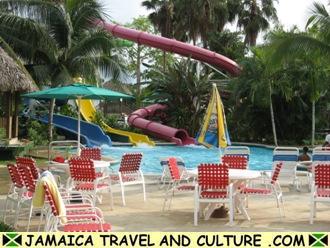 The Sly Mongoose is one of the park's smaller slides.

The Duppy Conqueror is the fastest slide in Kool Runnings, named from the Jamaican term for Ghost "duppy".

The Lightening Bolt is a 70 ft speed slide.

The Red Snapper is named after the fish which is abundant in the waters around Jamaica. 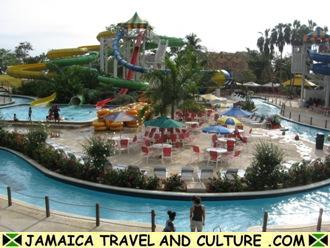 Coconut Island is a kiddy island and it offers shorter slides and shallow splash pools. The island is home to Mikie Manatee and Captain Mikie, the mascot of Kool Runnings. Well-trained lifeguards are on duty at all the water attractions on Coconut Island.

Anancy Village offers an alternative to water slides. There is a traditional merry-go-round the "Peenie Wallie Carousel", horseback riding and a bungee trampoline called "Bug-A-Boo Bungee Trampoline." There is also a fun Go-Kart track.

There are several themed restaurants at the water park. There is the Knot Out Sports Bar which offers views over the great morass, the Sweet Potato Grill which features delicious Jamaican food such as jerk chicken and escoveitched fish, the Guava Jelly Coffee Shop which serves coffee, snacks and take away pizzas. The Kool Blendz Juice Bar serves cold fruit drinks and slushies. There is also the Dash-een Restaurant serving fast food options like burgers and hot dogs. 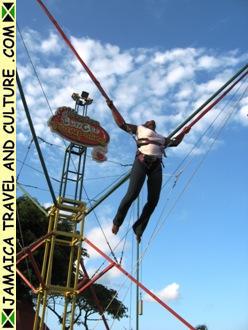 The Kool Runnings Water Park is opened from Tuesday to Sunday between 11:00 AM to 7:00 PM (closed on Mondays). The entry cost includes unlimited water rides (rides in Anancy Village cost extra). Children under four feet (48 inches) pay a reduced fee. Children under two get in for free.

The Park is closely monitored by efficient and well-trained lifeguards and staff who ensure the safety and good condition of all rides.