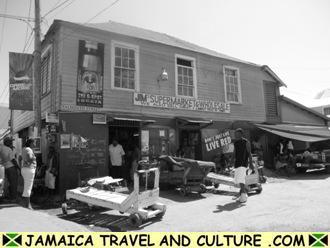 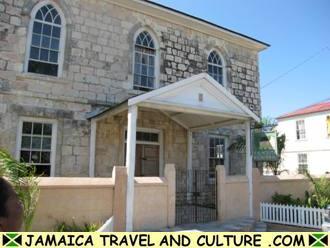 Taking a trip to Falmouth is like stepping back in time. Falmouth is the best preserved Georgian town in the Caribbean and is said to have some of the best examples of Georgian architecture outside of Britain. Walk down the historic streets and see grand Georgian houses standing shoulder to shoulder with quaint wooden dwellings.

The town was established in 1769 when Edward Barrett (the grandfather of English poet Elizabeth Barrett Brown) sold 170 acres of land for the establishment of the town. Barrett kept the costal land for himself and donated land for a courthouse, church and public buildings to be built. Whilst many towns grow organically, Falmouth was planned from inception. Roads were laid out in a grid formation and fresh water was piped from the nearby Martha Brae river to a reservoir in the town centre. Falmouth had a piped water system before even New York City.

The town takes its name from a town called Falmouth in Cornwall, England, which was the birthplace of Sir William Trelawny, the Governor of Jamaica at the time. The main roads (King Street, Queen Street, St. Victoria Street, St. Rodney Street, St. George Street, Albert Street and Stanley Street) are named after English heroes of the era.

Between 1800 and 1840 Falmouth was one of Jamaica's thriving port towns. Jamaica was one of the leading sugar exporters in the world and much of Jamaica's sugar was shipped from Falmouth. The Wharves would handle around 30 ships a day, usually unloading slaves shipped from Africa and filling the ships back up with sugar and rum bound for Europe. Many grand houses were built in Falmouth as planters kept second homes in the town. The town was also known for riotous nightlife with many ships' crews eager to spend their money whilst on shore.

The decline of Falmouth

When slavery was abolished the sugar industry of Trelawny was badly affected. The 1840s also saw the rise of the steamship use for trans-Atlantis crossings. These heavier boats required a deeper harbour than Falmouth could offer. This double blow heralded a sharp decline in Falmouth's fortunes. With its commercial ventures suffocated, the wealth of Falmouth dried up and its deterioration has continued to this day.

Renovation efforts and plans for the future

The historic buildings of Falmouth are being actively restored by several non-profit organisations, Falmouth Heritage Renewal (website www.falmouthjamaica.org), The Georgian Society of Jamaica (website www.georgianjamaica.org) and Hands Across Trelawny. These programs have sought to renovate public buildings and private homes in Falmouth as well as providing vocational training to residents.

For many years now there have been plans to develop Falmouth as a major cruise ship destination. Cruise operators have been negotiating multi million dollar renovation projects with the Jamaican Government to establish Falmouth as a world class historical destination, similar to Williamsburg in Virginia (an English colonial town which Falmouth has often been compared to).

Places of interest in Falmouth