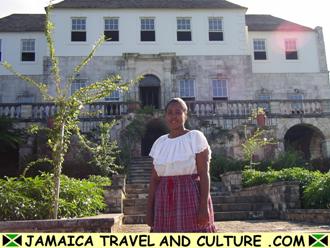 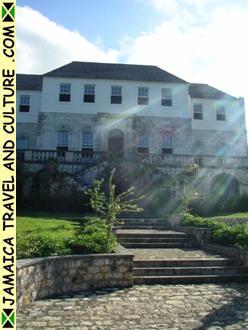 
The Rose Hall Great House is the legendary home of the White Witch of Rose Hall, Annie Palmer. Legend has it that Annie, Rose Hall's Mistress was an accomplished practitioner of Haitian Voodoo and during her reign at Rose Hall murdered three husbands and countless slave lovers. Her reign of terror was ended when she was murdered by one of her slaves and a ritual was carried out to banish her spirit from earth. However, it is rumoured that the ritual was not carried out correctly and that Annie still haunts the Rose Hall estate.

Tours of the great house are currently available. You will be guided by knowledgeable guides wearing traditional Jamaican folk attire. The tour takes you all around the great house, including the bedrooms where each of her three husbands were brutally murdered. Your guide will also tell you the history of the property, including all of Annie's alleged dastardly deeds. After being shown the inside of the Great House you will be taken outside and shown the grave on Annie Palmer, the final resting place of her body (if not her spirit). The tour concludes at the former dungeon in the basement which has been converted in to a pub.

You should bring a camera along to Rose Hall for two reasons. Firstly to capture the beautifully renovated Great House and its impressive views of the turquoise Caribbean Sea. Secondly, you just might capture some ghostly apparitions in your pictures. Several guests have reported seeing images of the White Witch in their photographs of Rose Hall, some of the best are on display in the entrance hall.

By the 1960s Rose Hall Great House had been abandoned for over 130 years. The roof and floors had collapsed leaving very little of the original interior remaining. However, an American couple, John and Michelle Rollins, saw the site's potential and bought the great house along with its 7,000 acres of land. They embarked on a multi million dollar refurbishment project which lasted from 1966 to 1971.