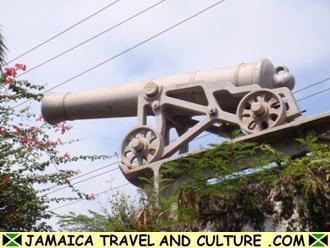 
Fort Montego is the remnants of an old British Fort which was built to protect Jamaica from French and Spanish attacks and to help keep the waters around Montego Bay free from pirates.

The cannons of the fort are reputed to have been fired only twice. Once was to celebrate the British capture of Havana in 1760 (when the gunner was killed following the cannon's explosion) and once when the gunner mistook an English ship for a French privateer (nobody was injured following this shot).

Today, all that remains of the Fort is three cannons and the remnants of the artillery store. The Fort is located at the point where the "Hip Strip" of Gloucester Road becomes downtown Montego Bay so can be easily visited if you are walking between these two areas.