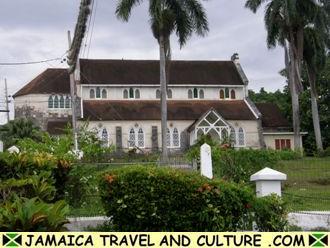 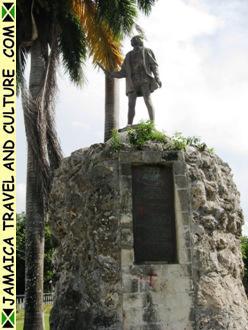 St. Ann's Bay's claim to fame is that it was the site where Christopher Columbus first Anchored when he "discovered" Jamaica in 1494. However, there is some debate about this as many believe Columbus first landed at the site which is now called Discovery Bay. Columbus named the landing spot Santa Gloria and established the town of Seville as Jamaica's first capital city. He famously remarked that the land he had discovered was "the fairest that eyes had beheld" Christopher Columbus's discovery is remembered today with a statue of his likeness on the roundabout just West of town. 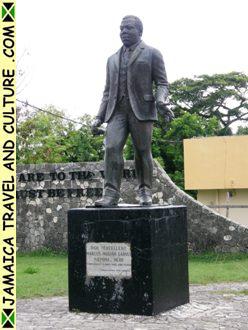 St. Ann's Bay became the capital of St. Ann Parish, largely due to the town's extensive shipping facilities. However, in recent years, Ocho Rios has grown rapidly and eclipsed St. Ann's Bay, both in terms of shipping and tourism. A visit to St. Ann's Bay nowadays is a step back to olden times. Many of the buildings in the town have been preserved in their original form, most notably the St. Ann Parish Church and the St. Ann's Bay Courthouse.

The St. Ann Parish church is on the corner of Main Street and Church Street, dating from September 1871. Close by, the St. Ann's Bay Courthouse on Main Street was built in 1860.

Other sites of interest lie on the outskirts of town.

One of the most famous sites in St. Ann's bay is the statue of the Right Excellent Marcus Garvey, the town's most renowned resident. Garvey was born in St. Ann's Bay in 1887. After learning the printing trade through an apprenticeship with his uncle he moved to Kingston in 1906. A larger-than-life statue of Marcus Garvey stands outside of the St. Ann's Bay Library at the east end of town. The location is a fitting tribute to Garvey who had a well renowned love of reading.

The Lady of Perpetual Help Church

The history of the Lady of Perpetual Help Church begins in 1534 when construction began, under the watch of Abbot Peter Martyr. However, shortly after construction began the capital of Jamaica was moved to St. Jago de la Vega (now called Spanish Town) and the church was not completed. The church was known as the Peter Martyr Church, if it was completed this would have been the oldest church in Jamaica.

It is believed that the church was incomplete when Jamaica was captured by the British in 1655. Following the arrival of the British, Catholicism was outlawed and the church fell in to a greater state of disrepair. In 1925, 5 acres of land belonging to the Seville Estate (including the original site of the Peter Martyr Church) were donated to the Catholic Church. The Lady of Perpetual Help Church was built on this site between 1939 and 1943, using the original stones from the Peter Martyr Church. The Church (now a national monument) is attractively clad in foliage and it's grand entrance is flanked with royal palm trees.

The Church is located at the far west end of town, close to the statue of Christopher Columbus. 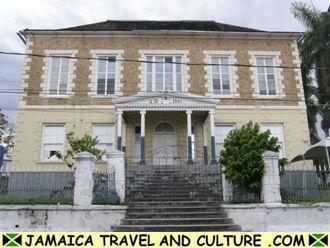 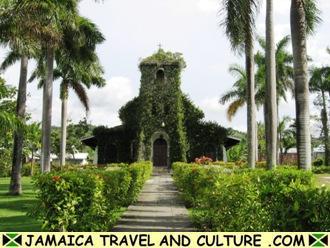