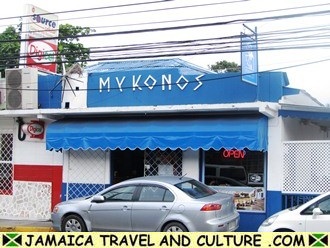 
Mykonos restaurant is the only Greek restaurant in Jamaica. Mykonos has been widely praised for both the quality of food served and the novelty of being able to sample cuisine which is not available elsewhere on the island. Typical Greek dishes such as spanakopita, tzatziki, gyros and Greek salad are available. However, the most popular dishes served at Mykonos are the pepsi-cola ribs and a combination platter, giving a taste of many different dishes. Mykonos is decorated in a traditional Greek blue and white design, reminiscent of Greek flag and the distinctive houses of the Greek islands.

Mykonos is owned and run by Dimitri Konidis. The restaurant was originally located on Main Street and moved to Fisherman's Point in 2012.