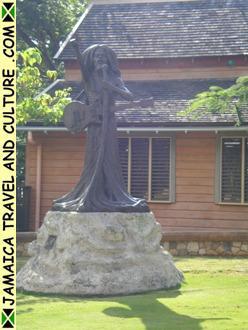 The Bob Marley Statue in Island Village is an artistic interpretation of Marley, sculpted by Jamaican Sculpture Christopher Gonzales. The statue portrays Marley growing from the ground, like a tree. His legs blending in to a trunk shape at the base, his dreadlocks joining with the roots of the tree and Marley is holding his microphone stand like a staff. Gonzales is quoted as saying that "the symbolism of the tree trunk from which the figure emerges represents Marley's ascent from the ghetto into international acclaim with the music he created".

The Bob Marley statue had a long and controversial life before finding a home in Island Village. Christopher Gonzales' statue was originally commissioned to stand outside of the national stadium in Kingston, to commemorate the death of the reggae legend. However, the public (and the Marley family) did not take well to Gonzales' artistic interpretation of Bob Marley and were highly vocal in their criticism. The statue was swiftly removed from its spot outside of the national stadium and the Jamaican Government commissioned Alvin Marriott to sculpt a replacement. Marriott's interpretation was more true-to-life and met with the approval of the Jamaican public; it can still be found occupying the spot outside the national stadium.