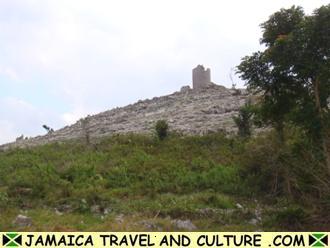 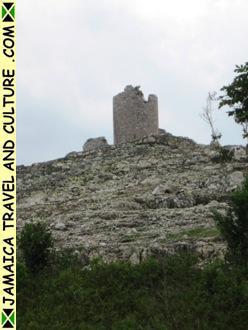 
Edinburgh Castle (a stone former great house) is located in rural St Ann Parish. The ruins of the castle are owned and managed by the Jamaica National Heritage Trust (JNHT). Whilst there are few physical remnants of Edinburgh Castle, the history of the castle is vividly recalled the grizzly actions of its former owner, Lewis Hutchinson.

Hutchinson was born in Scotland in 1733. He was believed to have studied medicine before moving to Jamaica in the 1760s. It is not known whether he commissioned the building of Edinburgh Castle or if it was already constructed before he arrived (or whether it was named Edinburgh castle in honour of his Scottish roots). One thing that is known is that shortly after his arrival at the great house, travellers passing by the property began to disappear. It was said that Hutchinson could dispatch unwitting travellers with a single shot from the castle. For travellers unlucky enough to reach his front door (or for guests he invited to his home) their fate was often much worse, these victims were said to be tortured before being killed. The bodies were then disposed of in one of two sinkholes on the estate or left in a hole in a cotton tree for vultures to devour.

Knowledge of Hutchinson's deeds was widespread but, such was the infamy of his crimes, police and residents were too afraid to approach the property to apprehend him. One day a young English soldier named John Callendar bravely decided to bring the Mad Master to justice, however, he was shot on site in front of many witnesses. This brazen murder inspired a great demand across the island to bring Hutchinson to trial. Hutchinson was, however, one step ahead of the crowd and fled south to Old Harbour where he launched his escape bid by sea. Fortunately, the famous Admiral Rodney was alert to Hutchinson's escape and spotted his craft in the ocean. Hutchinson leapt overboard but his head of red hair was quickly spotted bobbing on the turquoise Caribbean Sea.

Hutchinson was tried for the single murder of John Callendar but, following an inspection of his home, 43 wristwatches and bundles of clothes were found, believed to be taken from his victims. It was also revealed that Hutchinson was assisted by other upstanding members of the community who took a similar, psychotic, delight in these crimes.