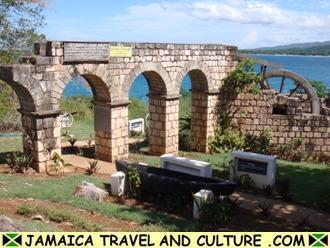 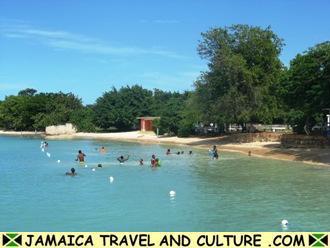 The town now known as Discovery Bay was originally named Puerto Seco ("Dry Harbour") by Christopher Columbus in 1494. It was named as such because Columbus could not find a source of fresh water close to this natural harbour. Columbus later found the fresh water he was looking for 5 miles to the west and named the area "Rio Bueno". In 1947 the town was renamed "Discovery Bay" to refer to the town's history as it was believed that this was the spot that Christopher Columbus first set foot on Jamaican soil. However, this claim hotly contested and two other towns also claim to be Columbus's first landing point, Rio Bueno and Seville. 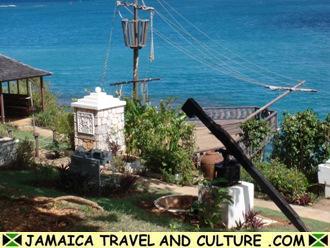 Columbus Park is an open-air historical and archaeological museum, set on 3 acres of Discovery Bay, overlooking the ocean. The museum features a wide range of artefacts which were excavated when the Kaiser Bauxite processing plant was developed. Artefacts include:

The museum has recently been remodelled and now includes a bar and a branch of the popular jerk restaurant "Scotchies". There are also ambitious plans to further develop the museum in the future. 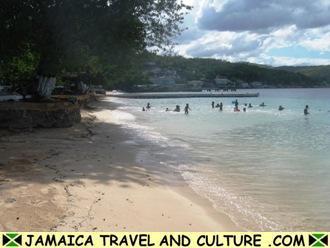 The Puerto Seco Beach is a large white sand beach. It is very popular with local residents at weekends as well as tourists staying in the nearby luxury villas throughout the week. The beach has all of the amenities you would expect from a modern private beach, including:

There is also a childrens' playground, including slides and swings. 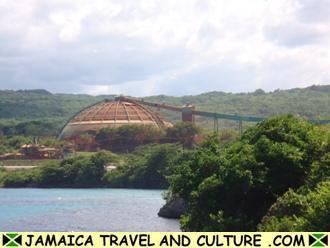 Dominating the inland side of the road is the imposing structure of the Kaiser Bauxite processing plant. The grounds are home to the annual "Pushcart Derby" where fearless contestants race pushcarts down the steep hill of the plant. The derby featured in and was made famous by the 1993 movie "Cool Runnings" which told a fictionalised account of the true story of the Jamaican bobsled team's qualification and participation in the 1988 winter Olympics in Calgary.