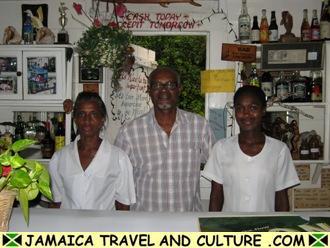 Woody's Low Bridge Place has been operating in Port Antonio since 1986 and is run by Charles "Woody" Cousins and his wife, Cherry Cousins.

Woody's specialises in homemade burgers, all made from local ingredients. Vegetarians are also well catered for with vegetarian burgers, cheesedogs and grilled cheese sandwiches. Hotdogs and fries are also available. Three course meals and Jamaican classics such as curried goat and jerk chicken can also be made to order. If special food is required, it is necessary to call in the morning, as all food is cooked to order, just how Cherry and Woody would cook for themselves.

Special orders are available for any number of diners. However, for larger parties, Woody's will arrange entertainment with a live band and Woody himself taking the microphone. 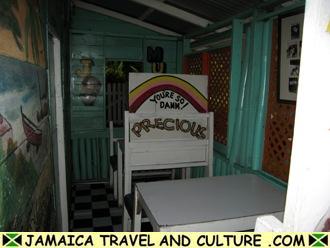 Woody was born in Kingston but his family moved to the Drapers district of Port Antonio when he was a baby. He has been working in the local tourist industry since 1963. In words which echo the famous line from The Godfather, he told me that he "Kept on trying to get out of the tourism game but something always draws me back in." His last attempt to venture in to a new field was the Low Bridge place property. Woody intended to run the business as a stall, selling homemade corned pork. However, he was working as an MC at the Fern Hill Club at the time and was very popular with the guests. They told him that his people skills would be wasted selling corned pork by the road and talked him in to setting up a bar. Woody continued to work at the Fern Hill hotel, leaving Cherry to run the bar. Woody tells me that, even today "she's the boss". 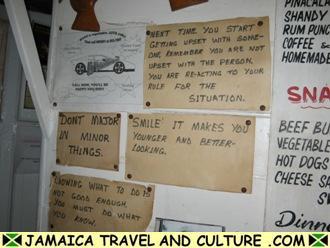 In addition to running the bar / restaurant, Woody is also an aspiring reggae singer, recording under the name "Papa Woody". A video for one of Papa Woody's songs is currently being aired on Satcom, a Port Antonio based local tv channel. He is currently looking for a record contract.

Woody's CDs are available to purchase at the bar and with very little encouragement, he can be persuaded to play his backing track on the stereo and treat customers to a live rendition of one of his tracks.

Cherry makes homemade jerk seasoning from local ingredients. Jars of seasoning are available for customers to buy and try out at home. Cherry was not in the bar last time I visited but hopefully I will be able to speak to her next time i'm in Port Antonio. 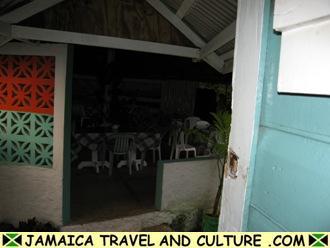 More than just a burger bar

Woody and Cherry also offer nature walks around their garden, with expert knowledge of the plants and medicinal uses of the herbs they grow.

The bar is decorated with inspirational slogans, such as "Killing time is not murder, it's downright suicide", some of which were made up by Cherry, Woody and their customers.

Woody and Cherry love the laid back nature of the Portland parish saying that "This is a place where you can come and feel relaxed, less tense, enjoy, relax and talk". Both Woody and Cherry are very friendly and welcoming, saying that "People walk in as customers and leave as family". Woody and Cherry now have members of their extended family regularly visiting them from the four corners of the earth.