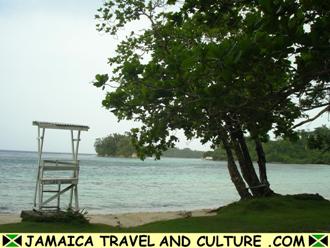 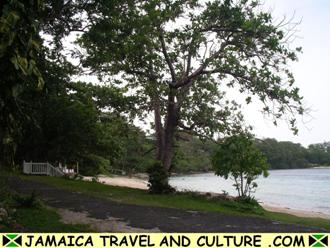 
San San Beach is a private beach close to Frenchman's Cove. After paying a small entrance fee you can use this one and a half mile long stretch of white sand which stretches out into the turquoise Caribbean Sea.

San San Beach is one of the best beaches in the area for snorkeling, there are several reefs off the coast which have legally enforceable fishing restrictions.

If you feel like a challenge then you can swim out to Pellew Island which is some 200 meters out to sea. Pellew Island is know by many names, including Princess Island, Woods Island and Monkey Island (not to be confused with the other Monkey Island in Port Antonio which lies opposite the Folly Ruins).

There is a bar on the beach which serves cold drinks and simple barbequed meals. Lounging chairs are also available to hire.