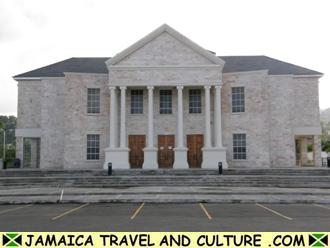 
The "New Courthouse" in Port Antonio is an impressive neo-Georgian structure, located just outside of Port Antonio in the Boundbrook area (between the Errol Flynn Marina and Dickie's Best Kept Secret).

The courthouse was built by local billionaire businessman Michael Lee Chin as part of a unique deal. Port Antonio's original courthouse was badly damaged by a fire in 2004. Lee Chin offered to finance the construction of the courthouse in exchange for taking ownership of the old courthouse to renovate and use a branch of his NCB Bank.

The courthouse is built in a neo-Georgian style, in keeping with the characteristic style of Port Antonio. The building is raised on a low platform to add grandeur and as a measure of protection from flooding. To maintain the stately atmosphere of the building vendors are forbidden from setting up stalls in the grounds and taxis are forbidden from congregating in the area.