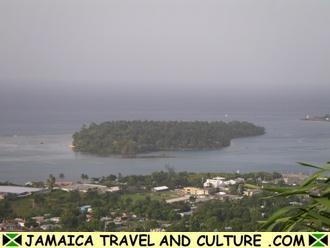 Navy Island - Opposite the Titchfield Peninsula and West Harbour

Navy Island gets its name from the British Navel base which was set up there in the 18th century to protect the Port Antonio and to service ships.

More recently, the island was owned by Errol Flynn, who entertained his jet-setting friends throughout the 1950s. Until fairly recently, the Island has been maintained as a tourist resort and attraction, with a club bar, beaches, watersports facilities, marina, wedding chapel and African style cottages.

The Island is now closed to the general public.