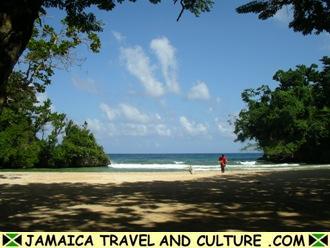 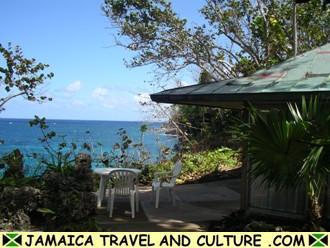 Frenchman's Cove was built by Garfield Weston, a billionaire whose business empire included Fortnum and Mason. The resort was run as a "no expenses spares" VIP destination and used to be one of the most exclusive (and, indeed, expensive) resorts in the world. When walking around Frenchman's Cove, it's easy to see why members of the 60's elite made this their destination of choice. The resort is built around a stream-valley where a river winds through the middle of the wide valley, over a white sand beach in to the blue Caribbean Sea. The resort is rich with Jamaican flora which, in turn, attracts a range of wildlife. Most notably glow worms (aka fireflies and peenie-wallies), who light up the forests at night.

Unfortunately, the resort became financially unviable and by was closed as a resort for a long period of time. The beach, however, remained open to the public. The resort has now reopened and is run more conservatively these days, offering a continental buffet breakfast and a lunch time barbeque on the beach and a bar. The villas and rooms have been refurbished and are available to rent at low prices.

Non-guests are permitted to use the Frenchman's Cove beach if they pay a small entrance fee.