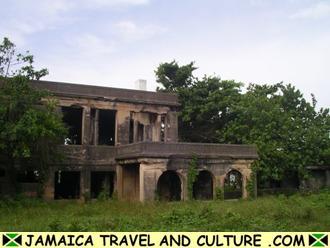 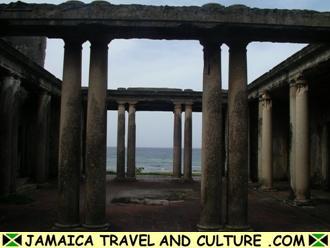 Many stories exist about the famous Folly Ruins.

A myth exists that the great Folly Mansion was constructed by a rich American man to impress his sweetheart and convince her to move to Jamaica with him. However, corners were cut in the construction and cement was mixed with saltwater rather than fresh water. When his wife came to inspect the property it had already begun to crumble and she exclaimed "What a Folly" and flew back to America, never to return. The Folly Mansion was then left to crumble in to the ground.

The Folly Mansion was actually built in 1905 by a retired mining engineer, Alfred Mitchell, for himself and his wife, the Tiffany heiress, Annie Tiffany. The Mansion was a grand structure in its heyday, styled on a Roman Villa with 60 rooms spread over 2 floors. 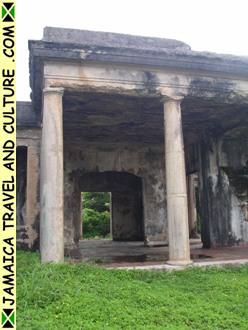 The mansion was equipped with all sorts of modern conveniences for it's day, including a wind-powered generator which pumped seawater in to an indoor swimming pool, its own power station and independent water reservoir. The Mitchell's kept all sorts of animals at their property, including peacocks and monkeys. The monkeys were bought to Jamaica by Mitchell's son-in-law, the explorer Hiram Bingham who was married to Mitchell's daughter, Alfreda. The monkeys were soon given the free-run of the nearby island which has subsequently been renamed Monkey Island.

During his stay at the Folly Mansion in 1911, Mitchell's other son-in-law (the British Astronomer Sir James Deans, who was married to his other daughter, Charley) made a sighting of Haley's comet.

Alfred died in 1911 and Annie continued to live at Folly Mansion until the outbreak of World War One, when she returned to the USA. The Mansion has since fallen in to a state of abandonment, has crumbled in to the ground with time and is now somewhat vandalised. This has not stopped it from becoming and alluring destination, attracting many sightseers, photographers and models for fashion shoots and directors shooting videos for dancehall artists.