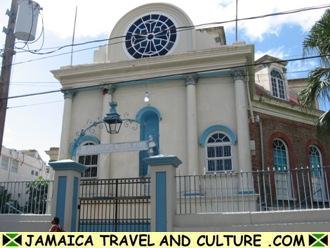 The St Andrew Scots Kirk began life as the Scots Kirk when it was constructed during the years 1813 to 1819. Much of the original funding for construction came from donations from Scottish residents of Jamaica at the time. The church mostly attracted a white Scottish congregation, earning it the nickname "the Backra Church".

The original Scots Kirk was the main Presbyterian Church in Jamaica until 1907 when it was destroyed by the great earthquake. The current church was built on the same site, to the same design (but slightly shorter).

The St Andrew Scots Kirk is a red-brick octagonal shaped building, the building is surrounded by stone columns. The church also features a dozen mahogany pillars which were a feature of the original 1813 design. There are blue and white saltire cross designs on the stained glass windows, reflecting the church's Scottish heritage.