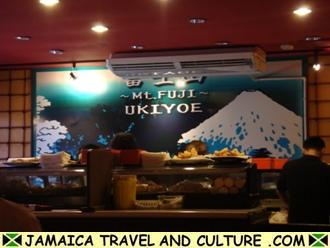 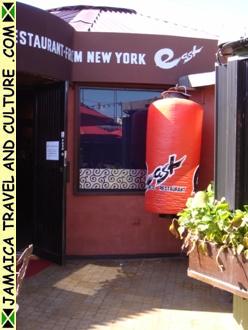 
East is Kingston's premiere Japanese restaurant. The restaurant is located in the fashionable Marketplace area and is open for lunch and dinner. It is a franchise of the New York based East sushi restaurant.

East serves a wide range of sushi and sashimi dishes, prepared in front of diners at the sushi bar. Cooked Japanese meals such as tempura and teriyaki dishes are also available. Seating is available inside (either at a table or at the sushi bar) or outside on the patio.

The restaurant opened in 2004 and quickly became very popular amongst the uptown Kingstonian crowd. The restaurant is always busy, if you plan to visit during the weekend then booking ahead is advised.

The restaurant is owned by Japanese chef "Taka" (Kzumi Utoguchi). Taka hails from Japan, where he spent 14 years studying and preparing traditional Japanese sushi. Taka then spent two years in New York and Miami before moving to Jamaica.

In Jamaica chef Taka established the sushi restaurant in the Kingston Hilton which he ran for five years before opening the Kingston franchise of East. 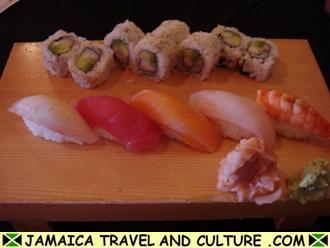