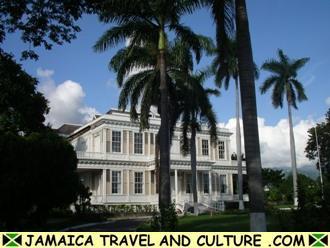 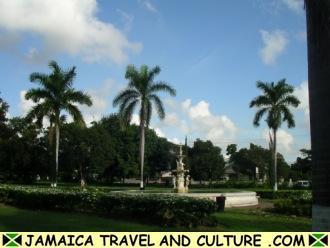 Devon House was built in 1881 and originally belonged to George Stiebel, a man who became Jamaica's first black millionaire from gold mining projects in Venezuela. The property subsequently had several owners and was due to be sold to developers in the 1960s. However, the Jamaican Government caught wind of the development plans and in 1965 placed a restriction order on development under the National Trust Act. The Jamaican National Trust then set about restoring the property. Devon House was officially opened to the public in 1968 and from 2002 has been run by the Devon House Development Company which is responsible for the re-development of Devon House.

Before entering Devon House, visitors are welcomed by ornate fountains and palm trees on the front lawn. Guided tours are available inside the 2 story property, where you can get a good look at the lourved balconies, Venetian crystal chandeliers, silk wall hangings and period reproductions.

The courtyard of Devon House currently houses some of the most acclaimed restaurants and shops in Jamaica:-