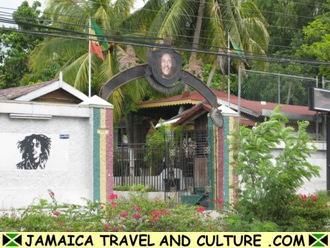 Make sure you visit Kingston's most visited attraction, the Bob Marley Museum on Hope Road. The museum is housed in Bob Marley's former home which he bought from Chris Blackwell in 1975. This was Marley's home until his death in 1981, the property also housed his Tuff Gong recording studio. In 2001 the Bob Marley Museum became a Protected National Heritage Site.

The guided tour through Marley's home includes:- The tour ends with a 20 minute film of Bob Marley's life, shown in the Tuff Gong studio which has now been converted in to an 80 seat cinema.

A reference library is also housed in the museum for those whishing to undertake some serious research of Bob Marley's life. In the grounds of the Bob Marley Museum there is a bar, Bob's Cafe, a shop selling clothes from the Marley family's "Tuff Gong" clothing range and another store selling African arts and crafts. T-shirts, posters and cds are also available here.

Photography is not permitted inside the Bob Marley Museum but it is possible to take pictures in the courtyard.